This spring my A Capella group, Three Miles Lost, found ourselves at the forefront of social change. An alumna of our all-female group, presented us with information about the"Sing For Survivors" contest  and we immediately sprang into action.  Each member of our group had been impacted by sexual assault either directly or indirectly so we saw this contest as an opportunity to use music as medium to promote social change, uniting our campus in solidarity against sexual assault. It was incredbily powerful to see how many people came out to be a part of our project and video. We invited the entire student body and faculty to join us for the project and were overwhelmed by the response.

Check out the video:

Our commitment to the project did not stop after creating the video. In fact, after the release it continued to grow. We decided to partner with our colleges' Title IX office and host an ItsOnUs rally off campus, in our broader community of Geneva, NY. People came from all over the area. It was reamarkable to see the impact our video had both in our immediate community and beyond. Using music as a medium proved to be extremely effective. The video spoke to many people. Survivors came forward with their stories, informing us our video had given them the strength to do so, and given them back the voice that had felt they lost. This was more than any of us could have asked for. We wanted to spread awareness, but with this video and the help of our community, we were able to make an even greater impact. I will always be grateful to our community for their support. This large scale impact would not have been possible without them. 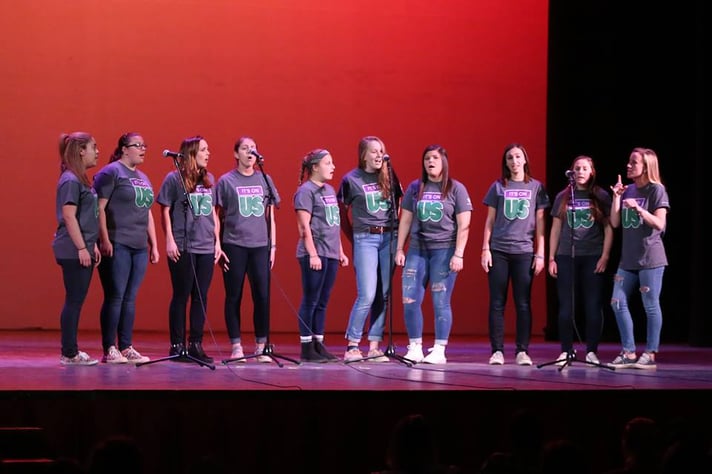 We called our community into action and they stood with us. It may have been our project, but it was our community that helped make this video so powerful. It was one of the most incredible things I have ever been a part of. Sometimes you don't realize how many people stand behind your movement until you find a unique way to involve them.

Three Miles Lost has decided to continue moving forward with this momentum and continue to use music as a medium to promote social change. Our next project should be released this fall. Our hope is that this next video can help spread awareness to other issues women across the globe must face every day.

We may have sparked the discussion on campus, but through music, Hobart and William Smith Colleges united in solidarity against sexual assault. The community took action because 12 students asked them too. If you have a movement you want spread,  don't forget to ask your community to join you.  You never know until you try, just how much of an impact you may make.

If you are inspired by Three Miles Lost and this community, click the button below to learn more with my free download.

I am passionate about helping voices join together to promote social change. I've been on the forefront of social change so I know the tips and tricks to get there.

We want to help you, so you can help change your community and beyond. We are passionate about change and your ability to raise awareness and take action. We've been in your shoes, let us help you.